Electronicon offers film capacitors "Made in Germany". From the coating of the film to the winding and manufacturing of the capacitors, the entire process takes place at the plant in Gera. Film capacitors offer various advantages in power electronics and are environmentally friendly in production.

Since the early forties, when SIEMENS&HALSKE AG moved parts of their production from Berlin to East Thuringia in the heart of Germany, capacitors have been manufactured by ELECTRONICON Kondensatoren GmbH (formerly RFT Kondensatorenwerk) in Gera. Highest quality and reliability of all products have been the basis of their company philosophy from the very beginning. Especially since its spin-off from the former East German electrical company RFT/VEB ELEKTRONIK Gera in autumn 1992, ELECTRONICON has succeeded in becoming one of the leading capacitor manufacturers in Europe with worldwide supply relations by continuously expanding and improving its product range. More than 500 qualified engineers and skilled workers produce capacitors and accessories for lighting and drive technology, power electrics and electronics, and power factor correction. Extensive investments in modern and environmentally friendly technologies guarantee the highest standards in manufacturing and quality assurance. The products of ELECTRONICON Kondensatoren GmbH are approved according to the latest standards by international testing institutions. ELECTRONICON's quality assurance system is monitored by TÜV according to ISO 9001. Since 1942 ELECTRONICON has been able to metallize its dielectric materials itself using the latest technologies. This ensures uninterrupted quality assurance from the raw foil to the finished capacitor. 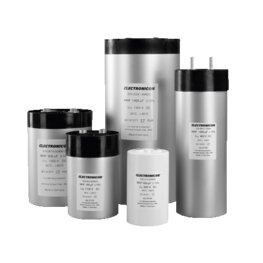